The Only Downtown Kzoo marketing campaign promoted the downtown experience over the holiday season with a focus to drive business to the core shopping and dining area of downtown. The campaign was backed by insights from the Very Important Downtowner market research study conducted over nine weeks in the summer of 2014.

The Only Downtown Kzoo holiday campaign proved to be the one of most effective marketing campaign to come out of DKI in recent years.  As a result of this unique collaboration, we were able to give our downtown businesses a tool to help their own business while promoting the downtown experience. Our downtown businesses were very involved and very fundamental to the success of the campaign

For the 2014 holiday season, we were able to produce a comprehensive marketing campaign which included print, mailers, print ads, billboard and digital advertising. The campaign helped reach an additional 80,000+ people on Facebook alone and 260,000+ via Google Adwords advertising. Rhino Media Productions was one of our sponsors and worked with DKI to create a series of holiday promotional online video commercials which were viewed over 68,000 times over the holidays alone.

A micro website was created to house information about holiday events, shopping and dining information, well as a Gifts Under $50 promotion.  Prior to the launch of the campaign, the entire plan was presented at an informational meeting aimed to educate downtown business owners of the current marketing initiatives, and show them how to participate. We asked them to submit a listing of a gift item under $50 in their store in order to create the Gifts Under $50 promotion.  We also supplied them all with flash drives which contained campaign graphics for use on their own websites, social media

Marketing Development Results:
-Produced the onlydowntownkzoo.com campaign microsite which featured the “Gifts Under $50 promotion” which had 26 gifts.
-Mailed 25,193 postcards to 49009, 49008, 49024 zip codes
-Hand distributed 5,000 postcards downtown businesses, WMU Medical School faulty/staff,  and throughout parking ramps
- Distributed 250 table tents to downtown restaurants
- Distributed 100 posters throughout downtown and inside Epic parking ramp
- Distributed 20,000 cards for Free Parking on Thursdays in the Epic parking ramp.
- Displayed two sandwich board signs outside of the Epic Ramp entrances to promote the Free Parking Thursdays.
- Created a banner that was carried in the Holiday Parade and displayed on the Westnedge Ave overpass.
- Placed a 1/3 page ad in the November edition of Encoremagazine.
- Placed a banner ad over 3 pages in the Destination Downtown portion of the December Encore magazine, as well as an ad inside the magazine.
- Ran digital billboards through Adams Outdoor Nov. 24-Dec 25. The billboards featured three half spots on Westnedge Ave (south facing), Gull Rd at Borgess and West Main. Adams Outdoor became a sponsor the the campaign and matched the ads for another 3 half-spots on the billboards.
- Developed paid Facebook posts promoting Gifts Under $50, Free Parking, 30 second Only Downtown Kzoo video which received over 28,000 views. Paid posts reached 80,000+ people
- Google Adwords campaigns: This video campaign had 42,718 views and 129,816 impressions and the search network 747 clicks and 133,966 impressions 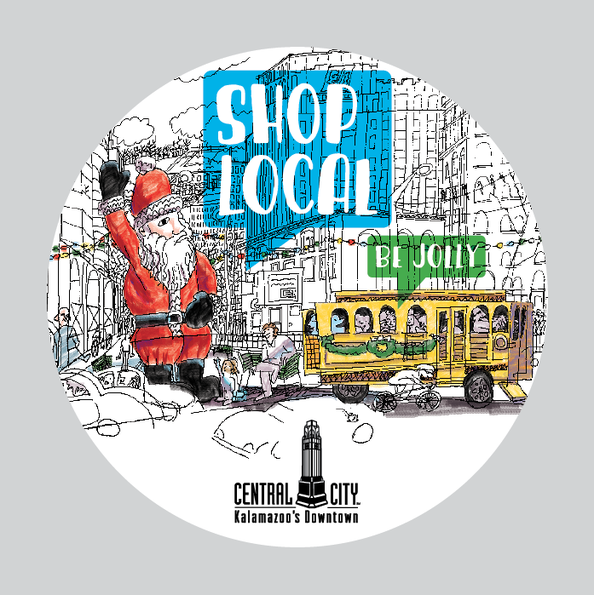